Following several years working as a specialist tunnelling subcontractor Paddy Forker set up P Forker Contractors Ltd in 1972 and with his ‘can do’ approach soon established a reputation for problem solving and innovation.

The company initially worked mainly in the West Midlands for Local and Metropolitan Councils as well as for Severn Trent Water, specialising in main drainage, sewerage, tunnelling and timber headings.

The 1980’s saw the company carry out many major sewerage infrastructure projects in the region, notable examples include;

Phases 1, 2 & 3 of the Bilston Brook Re-culverting and Ladymoor Foul Sewer Project for Wolverhampton MBC involving construction of 3km of large box culverts and adjacent pipes in deep open cut, tunnel & timber heading together with 2 large underground detention tanks. The project was carried out through congested industrial areas, across major roads, railways and canals and crossed Bilston Steelworks. The project included an early example of our innovation with the submission of an alternative open cut method instead of the designed tunnel solution. This saved the client a considerable sum of money as well as reducing project risks but required excavations of up to 20m deep. In order to carry this out ‘the largest Drag Box in Europe’ was procured for the project. Weighing 17.5 tonnes it required a 65 tonne excavator to pull it.

8 Contracts carried out on the Black Country Trunk Sewer for Severn Trent Water which included 5.0 km of segmental tunnel up to 2.7m diameter together with 3.5km of large diameter open cut pipeline. Several of the tunnelled sections were driven in compressed air to deal with high groundwater pressures. 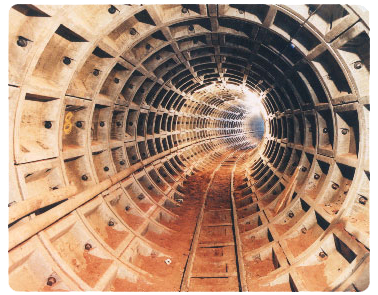 During the 90’s and throughout the last decade, Water, Sewerage & Main Drainage continued to be a core part of the company’s business and we were able to establish successful partnerships with Severn Trent Water through the AMP2, AMP3 and AMP4 capital investment periods (1995 – 2010), carrying out many major sewerage improvement and flood relief schemes.

In the early 1990’s we decided to use our extensive in-house technical and engineering skills to diversify our Civil Engineering and Infrastructure services and we have subsequently; carried out major road, highway improvement and development infrastructure schemes, constructed award winning bridges, completed numerous land remediation projects, become a rail contractor and carried out a range of commercial & industrial building projects, all services which we continue to provide today.

In 1988 the acquisition of Midland Grouting & Drilling Co Ltd enabled us to expand into the Ground Engineering market.

Redundant Mine Investigation and Mine Infilling work, which had a range of special requirements and restrictions, was a key catalyst for investment in specialist plant and we were the first contractor in the UK to purchase Dual Head drilling rigs which enabled drilling clean, accurate, one pass fully cased holes which could be immediately used for infilling, monitoring, survey, barrier construction or mine water abstraction purposes.

This allowed us to quickly transform the original low tech Drilling & Grouting outfit to one which offered a full range of Ground Engineering and Geotechnical services, utilising a range of specialist plant and techniques. 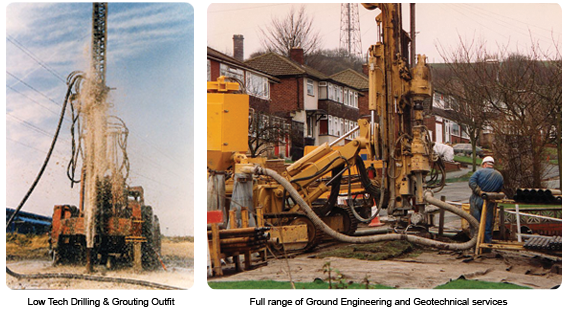 During the 90’s we carried out some of the largest Redundant Mine Infilling and Mine Workings Stabilisation schemes that had been carried out in the UK. Some of these contracts afforded us the opportunity to submit innovative drilling solutions to overcome significant problems.

An example of this was Cinder Hill/Hurst Hill Mine Infilling in Wolverhampton (£3.0m, 92/93). The scheme required infilling collapsing limestone mine galleries under residential property and an operational cemetery. Visitor access was to be maintained to graves at all times and the contract anticipated large working platforms erected over the grave areas. Our dual head drilling capability allowed us to propose an angled hole solution from the cemetery roads thus removing the need for platforms & allowing unrestricted access during the work. 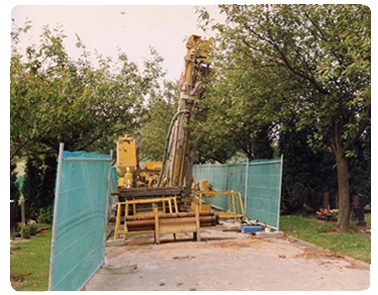 Castlefields Area 2 Limestone Mine Infilling Scheme in Dudley (£6.5m), completed in 1993/4, involved infilling and stabilising the disused Castlefields limestone mine over an area of 15 hectares at depths of between 40m and 140m below ground level using 375,000 tonnes of pfa/cement infill paste. The collapsing mine had caused sterilisation of land formerly used by Dudley football and cricket clubs and has subsequently been redeveloped as a business park.

The 1994/5 Advance Works Contract for Stabilisation of Mine Workings on the A470, Pentrebach – Cefn Coed, Merthyr Tydfill is also significant. The £7.4m project to treat 26 outcropping coal seams along a 4km section of the road required drilling 10,000 drill holes and using 75,000 tonnes of grout to stabilise the workings under the new road. 18 drilling rigs were resourced to site.

This specialist area of ground engineering work has continued to develop with many major projects completed in the last 10 years and, with over 40 drilling rigs and a wide range of specialist grouting plant, Forkers is now the largest mine workings stabilisation contractor in the UK. 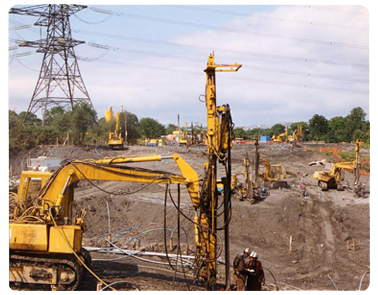